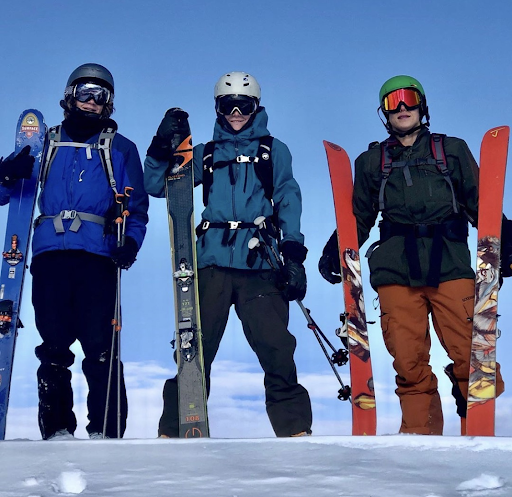 Colorado is probably best known for its one-of-a-kind ski resorts that attract skiers and snowboarders from all around the world. At Broomfield High School, skiing is quite a hobby among a majority of the students. James Knudsten, Cole Liebentritt, and Jay Alford are just a few of the many avid skiers here at BHS. As a group, they get together every weekend they can and head up to the mountains for some shredding. However, unlike many other Colorado skiers, the Broomfield Free Ski team enjoys an even bigger challenge: backcountry skiing.

Instead of riding a chairlift up a mountain to ride groomed trails and known terrain, backcountry skiing is where you hike up the mountain, using skins that go on your skis, and ski down the mountain in mostly unknown terrain that is not groomed or necessarily managed by a resort. Most commonly, the Broomfield Free Ski team goes up to Berthoud Pass, which is a popular spot with good terrain for this kind of skiing. Cole Liebentritt, a junior at BHS and a member of Broomfield Free Ski, says that backcountry skiing is, “a lot more peaceful and quiet and you can find much better powder and un-skied areas if you know where to look.”

Although backcountry skiing is known to be more enjoyable because of fewer people and more fun terrain, there is much more knowledge, gear, and skill that are key in skiing backcountry. The group says, “it’s definitely a good idea to take an avalanche class of some sort in order to learn how to not get yourself stuck in a bad situation and how to be prepared for it if one is to come.” In addition, the unknown terrain when backcountry skiing is dangerous because it is unmarked and there are many natural obstacles that are potential risks for injury or death.

Along with knowledge about certain dangers and risks that come along with backcountry skiing, the crew mentions the additional gear that is essential in backcountry skiing. Cole says that the most important tools that you need to use during the process are a shovel, beacon, probe, and skins. Overall, the whole process is not easy, as there’s never a time they haven’t come back from backcountry skiing without feeling sore from hiking and falling, as you can see from attempted tricks and wipeout videos on their public Instagram account: @broomfieldfreeski (go follow them!).

So, if you consider yourself an avid skier and you’re up for a bigger and more exhausting ski trip, more challenging terrain,