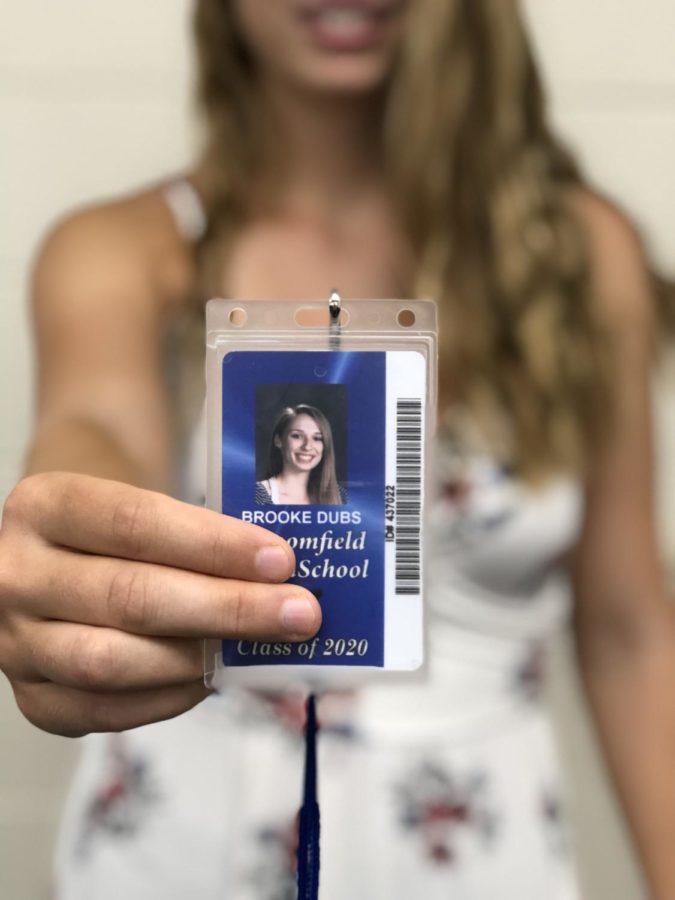 “Wear your IDs! Wear your IDs! IDs!” the screeching voices reverberate in our newly crafted hallways, the shouting commands us like we’re animals.

If you’ve stepped foot in Broomfield High School this past week, you’d immediately know that students and teachers alike are supposed to be wearing their IDs. It’s not simply enough to have it in your backpack or even be carrying it. No. It has to be dangling around your neck, overtly visible for all staff members’ viewing pleasures.

I alone have seen several accounts of rather rude and harsh ID enforcement; however, Vika Shoykhet’s eyewitness account of an encounter with a student and an adult especially stood out to me: “I was walking into school, and the [adult] was standing by the door making sure everyone had their IDs. This one girl was holding her ID, and the [adult] made her put it around her neck, go back outside, and re-enter into the building with it hanging around her neck.”

Was this really necessary?

Similarly, a less intrusive yet still condescending incident I saw is still prominent in my mind: I was heading to my locker where a student sat, minding his own business and keeping quiet, when another adult noticed the student didn’t have an ID on. She told him to put it on, so he pulled it out  of his wallet, hung it around his neck, and continued to keep to himself. This simply wasn’t enough for the adult: She continued to speak down to him, threateningly asking his name as if he were in some sort of major trouble.

Is this really the environment we want at BHS?

These students did nothing wrong; they listened compliantly (eventually), yet they were still further harassed about their IDs as if following directions wasn’t good enough.

I understand we need to be wearing these now for safety reasons. I understand it will help us to identify who’s allowed in our building. However, these vague reasons don’t help the student body to really get the point behind the IDs. How will this improve our safety? What would happen if someone who shouldn’t be in our building was in it? The authorities at Broomfield need to simply explain the rationale behind permanent ID wearing so we can really, truly understand the reasoning behind the IDs.

We’re high school students. We’re not babies. We can handle the information you throw at us regarding safety. It’s a real topic that we all need to be aware of, and giving us the specifics and details of the importance of the IDs would probably make us more willing to wear them.

What isn’t going to make us willing to wear them is by giving us vague information about the issue. Simply for “safety” reasons isn’t going to cut it.

Further, if administration wants everyone to be wearing them, it’d be much more effective if they enforced this new rule in a polite, kind manner. A simple smile, a please, a thank you, and a gentle tone goes a long way.

If adults demonstrated respect (which is, indeed, a component of BHS—Be Respectful) towards the students rather than asserting a condescending tone, then students would be open to the IDs. You respect us, we respect you. Simple. The power differential between students and admin illustrated on a daily basis ignites a sort of rebellious feel within students, but if we can demolish this and respect each other, all students and all adults, I definitely think students wouldn’t put up as much of a fight regarding wearing their IDs.

Being an admin or a teacher or a hall monitor can’t be easy. After a long day, it would be so easy to lose your cool when a student decides to not cooperate. To say these jobs are frustrating would be an understatement. However, what if this student’s parents were fighting at home? What if their dog just died? No one truly knows what’s happening behind the scenes, which is why we all deserve to be treated respectfully.

Though this is a new change for us all, I’ll be the first to admit that the IDs are kind of useful. It’s nice not to dig for my backpack when I need to open a door. It makes getting from place to place easier, and, in this way, it’s actually convenient.

That being said, I’m using my ID more. Not just because it’s around my neck and easy to access, but because I go outside for practically all of my passing periods now that I don’t want to deal with the chaos in the building. I purposely try to bypass the cafeteria and other crowded areas like this; it gets really old hearing teachers and monitors shrieking “IDs!”

Again, a gentle tone could mean saving a couple minutes on a walk from class to class.

Next time you’re out of class, look down and make sure your dangly thing is around your neck so that you’re not the next victim of the screeching “IDs!” bouncing around our hallways.